Midway Then and Now

Midway Atoll has been shaped by human use for many years before and after the defining Battle of Midway. 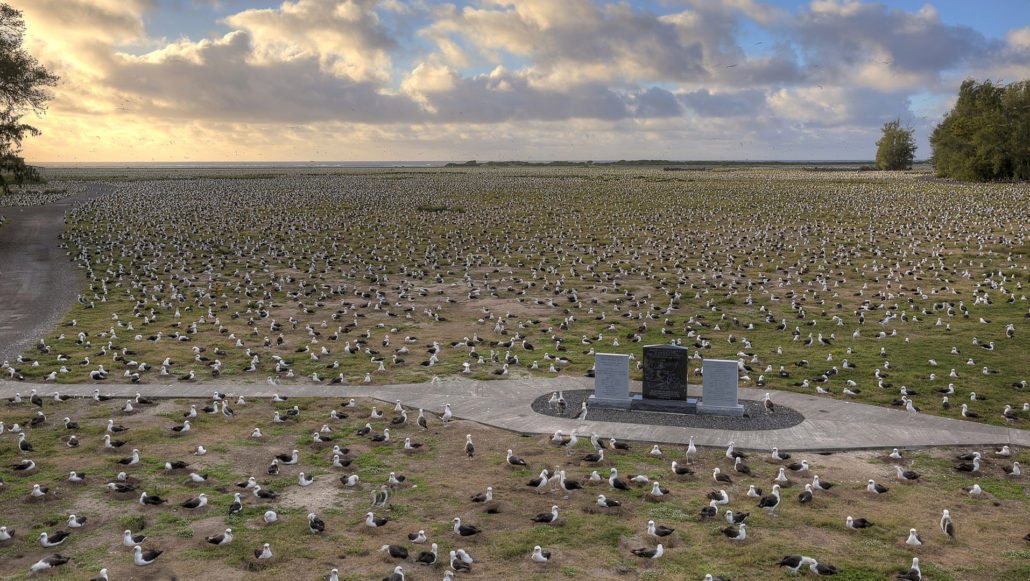 Polynesian and Hawaiian legends tell of journeys made to the small islands north of Nihau thousands of years ago.

Time and weather have obliterated any archaeological record, but archaeologists guess that travelers might have stopped at Midway. If they did, the atoll’s lack of vegetation for food probably kept them from staying long.

The first Euro-American voyage to Midway that we know about was made by Captain N.C. Brooks, who sailed to Midway from Honolulu in 1859 on a sealing and exploring voyage. Congress named the atoll “Midway Islands” in 1869 and began using it for transpacific trade.

In 1899, President McKinley proposed building a telegraph cable across the Pacific to enhance trade in the Pacific Rim. After a flurry of congressional debate and intense competition between telegraph companies, the Commercial Pacific Cable Company (CPCC) was awarded the contract. They were authorized to lay and operate a submarine telegraph cable from California to the Philippine Islands by way of the Hawaiian Islands.

The CPCC staff arrived on the atoll in 1903, after the permanent buildings were completed. They had plumbing for water and got their electricity from an acetylene generator. They also had an ice-making plant, a cold storage house, and a windmill.

The small colony had to be almost entirely self-sufficient. Supplies were set up to arrive twice a year, but they weren’t reliable: ships carrying supplies were sometimes lost to storms. In spite of the challenges, the company stayed on through the early years of the 20th century.

The submarine telegraph cable was complete and working well for commercial communication by the time the Naval Air Base on Midway was approved by Congress in 1939.

View of the Commercial Pacific Cable Company station on Midway, about 1913.

The Pan Am Clipper

In the 1930s, Pan American Airways decided to use islands in the Pacific as refueling stations for a fleet of amphibious “flying boats.” Seaplanes began landing on Midway to drop off cargo and passengers.

The Gooneyville Lodge, named for the Laysan albatross, featured twenty guest rooms and a solar-heated hot water system. Guests started arriving in 1936. But visitors were only able to enjoy the island’s amenities for a few years. World War II came to the Pacific, and Clipper operations ended at Midway on December 8, 1941.

A 1930s travelogue produced by Pan Am offers a glimpse of world of luxury awaiting the well-heeled traveler, along with the main attraction of any visit to Midway, the albatross! https://www.youtube.com/watch?v=Ms9hPlT31bQ  Minute 0-2:15 shows Midway. 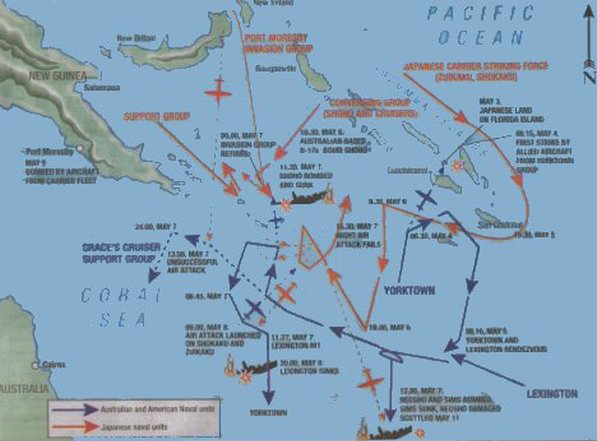 By 1939, the Army Corps of Engineers was dug in on Midway. Over the course of two years, Midway changed from a luxury stop-off to a state of the art military base, prepared for battle with a seaplane base, airfield, and defensive positions.

The 2-hour bombardment of Sand Island on December 7, 1941 caused extensive damage to several buildings on the base, including the seaplane hangar and the power plant. The 3-day Battle of Midway caused much more damage, but the infrastructure of Midway Atoll survived and continued to serve the Navy for many more decades.

Midway After the Battle

When the Battle of Midway was over, submarines began playing an increasingly significant role in World War II. Because of its strategic position in the Pacific, Midway Naval Air became a Submarine Advanced Base in 1942.

Between 1943 and 1945, Navy Construction Battalion groups, called “Seabees” for short, dredged about 5,000,000 cubic yards of material to make room for the new base and to expand Sand Island for an airfield.

A Gift of Art

One of the Seabees left behind a gift of art. Seabee Victor Nels Solander of the 123rd U.S. Naval Construction Battalion painted six 8’ x 12’ murals on the walls of Midway’s theater.

We know very little about Solander, but we do know he won a $100 war bond for two other paintings that hung in the Bachelor Officers’ Quarters, also built by the Seabees.

The six murals have been restored, thanks to a partnership between the Fish & Wildlife Service, the Friends of Midway Atoll National Wildlife Refuge, and the Pacific Aviation Museum Pearl Harbor. Today the murals hang at the Pacific Aviation Museum, where they are enjoyed by thousands of visitors each year.
Learn more about the murals here: http://www.pacificaviationmuseum.org/pearl-harbor-blog/the-art-of-war/ 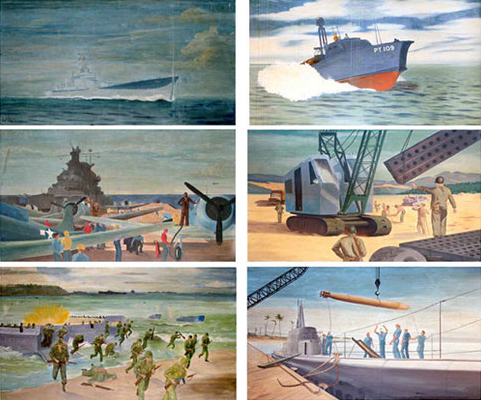 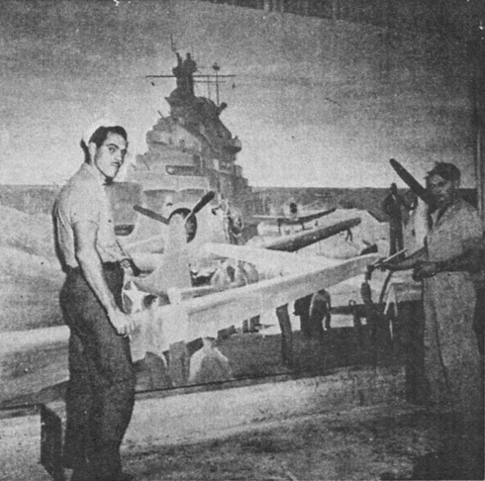 This is the only known photograph of artist Victor Nels Solander (right) in front of one of the murals Artist R.E. Conner is shown on the left. The photo was published in the 123rd U.S. Naval Construction Year Book for August 1943 to January 1945.