War Clouds in the Pacific

Tensions in Europe and Asia escalated in the 1930s, and the US military began studying ways to defend the West Coast. By 1939, they were taking steps to defend against the growing military strength of Japan.

The distance across the Pacific Ocean posed an enormous defensive challenge. Military strategists decided to build bases on islands, such as Midway, so that planes could hopscotch across the Pacific, stopping to refuel along the way.

“From a strategic point of view, an air base at Midway is considered second in importance only to Pearl Harbor.” – Rear Admiral Arthur J. Hepburn, 1938 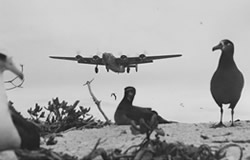 Between 1940 and 1941, military contractors deepened the harbor at Midway and began building a Naval base. 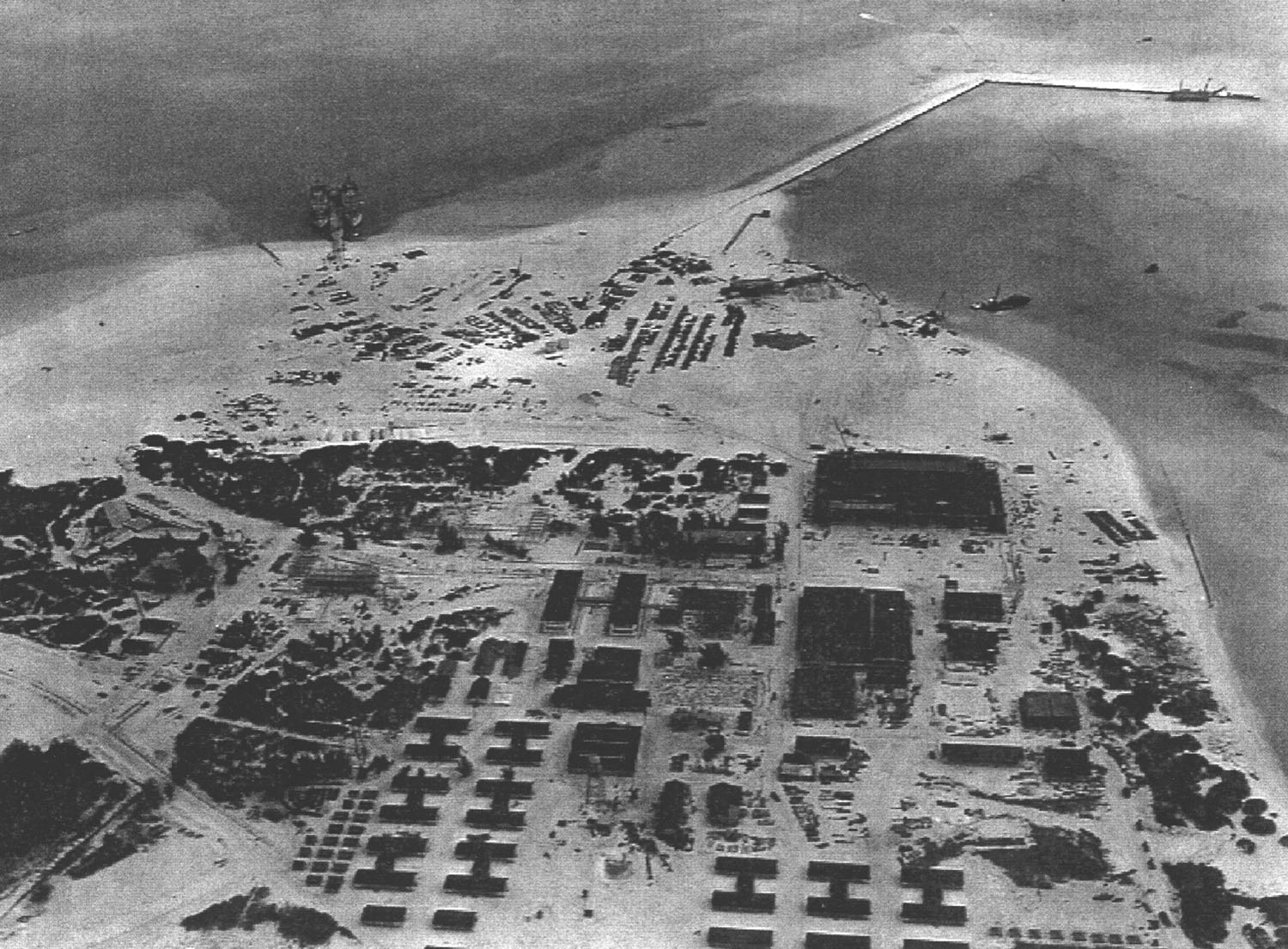 North end of Sand Island under construction in 1941. 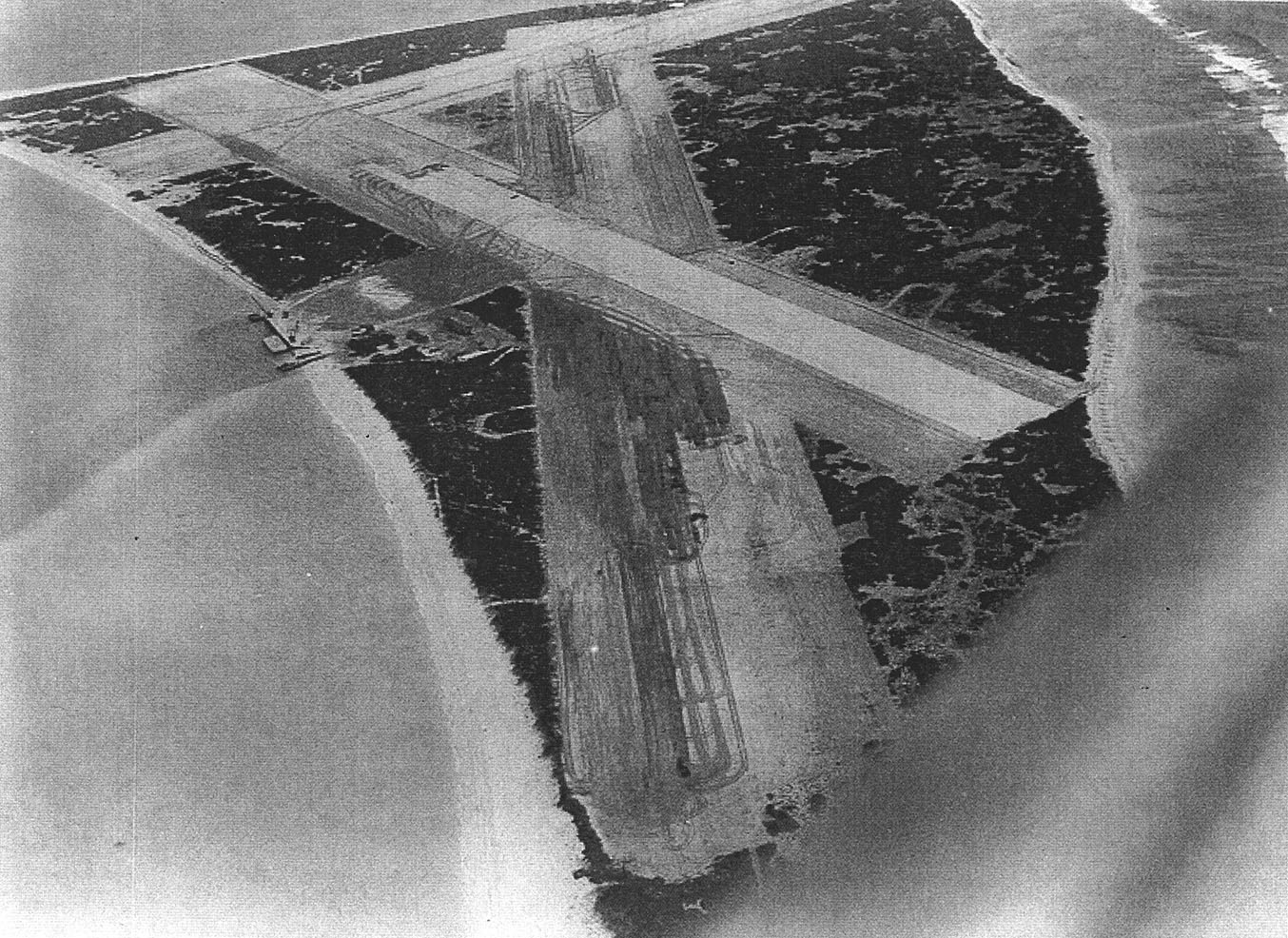 Runways under construction on Eastern Island in 1941

Men awoke on December 7th on Midway to hear the news of the attack on Pearl Harbor. Unbelief turned to grim realization and a scramble to prepare for an attack. High alert required men to man the defensive batteries, and seaplanes patrolled for any sign of the Japanese ships.

Under cover of darkness, the Japanese destroyers Sazanami and Ushio circled around Midway and bombarded the southwest point of Sand Island. The fringing reef is close to Sand Island on this side, and bright moonlight made the power plant and the seaplane hangar easy targets. 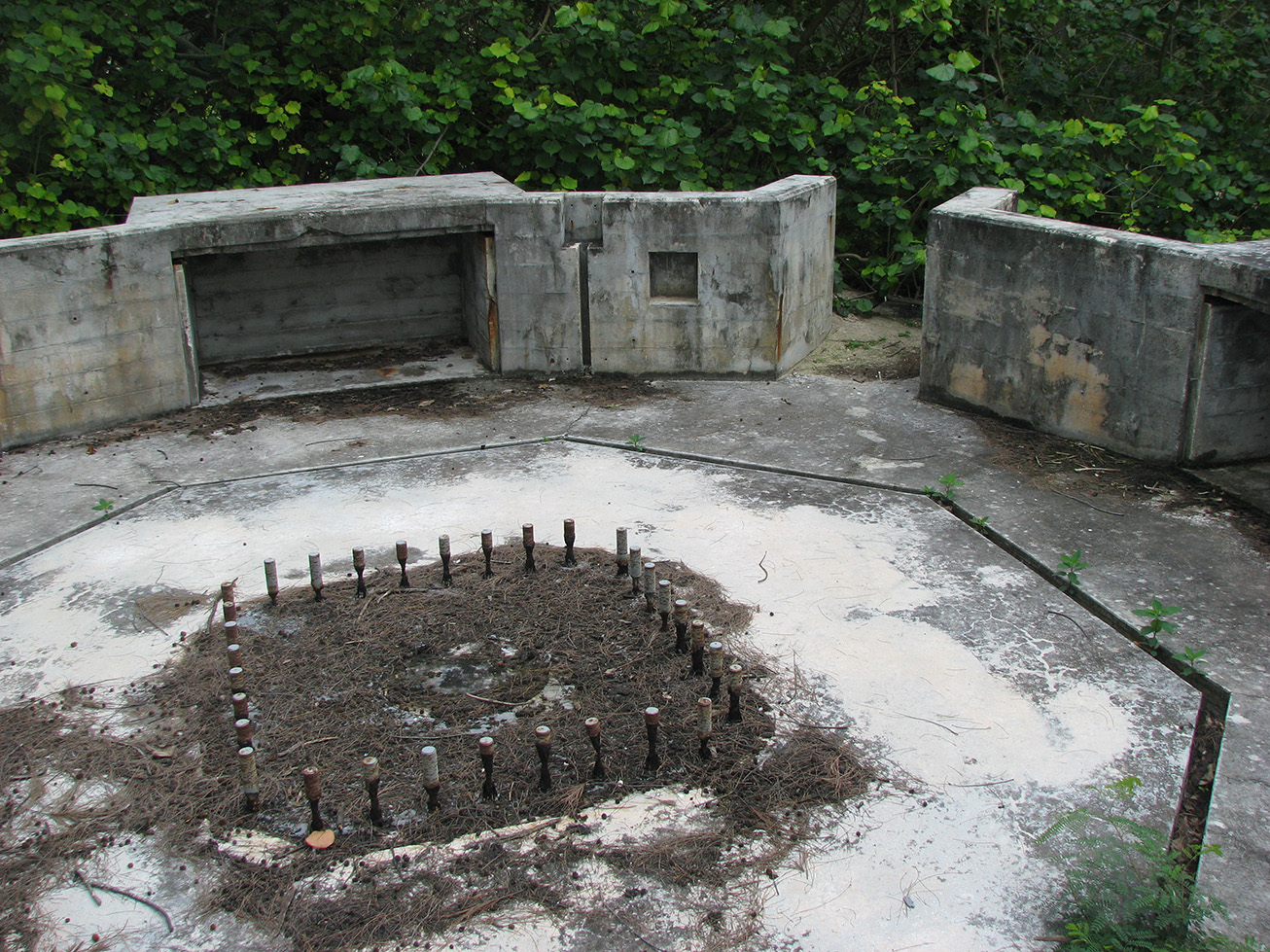 Battery C, “Charlie,” cut out in concrete near opening is where the radio was located. The gun was mounted on the pins in the center of the octagon. 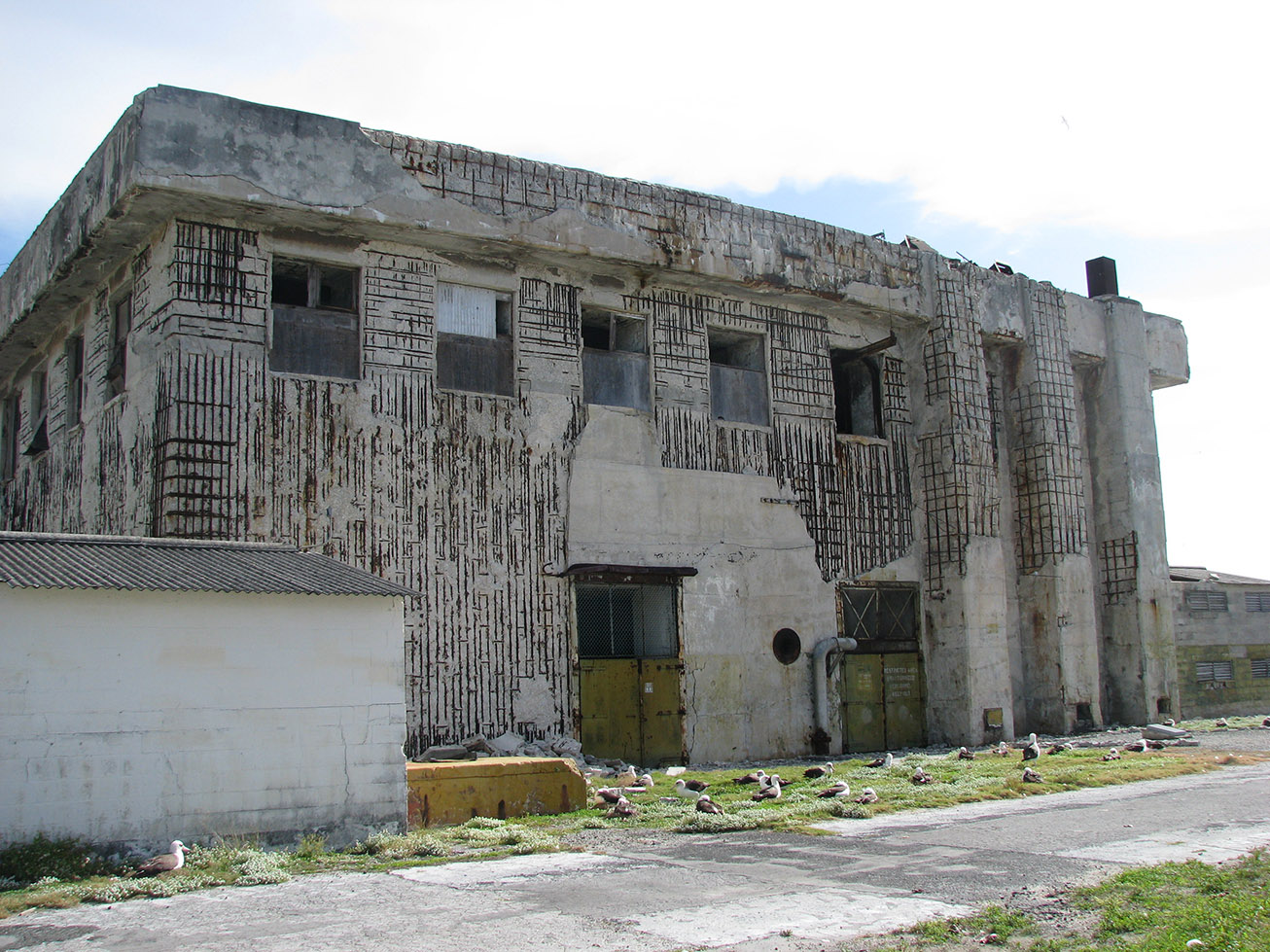 Suddenly a flash and a boom erupted from the Japanese ship, and a shell ricocheted through the window into the command center and exploded. First Lieutenant Cannon’s pelvis was crushed, and he began losing blood at a rapid rate. In spite of his terrible injuries, he refused to leave his post until Corporal Harold Hazelwood could set up the switchboard again and re-establish communication with the batteries on the beach. Cannon died from loss of blood soon after. 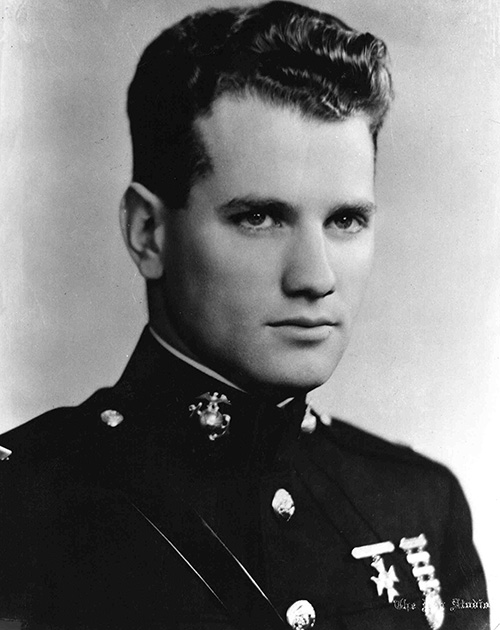 For his courage and sacrifice, Cannon was posthumously awarded the Medal of Honor. It was the first Medal of Honor given to a Marine in World War II.

Cannon is buried in the cemetery at Punch Bowl, Honolulu. 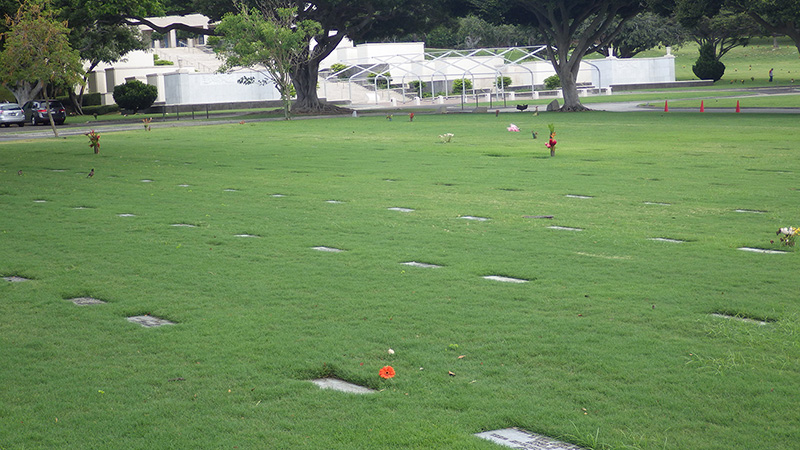 With Pearl Harbor in tatters and Midway shelled, the U.S. entered World War II. Later that month, Guam was captured by the Japanese and Wake Island fell. The Japanese Imperial Navy looked unstoppable. For the U.S. military and citizens at home, December 1941 was the lowest point they had ever known. Visit the Valor in the Pacific website for more information.

In the weeks following the attack on Pearl Harbor, the Japanese conquered Wake Island, Singapore, Hong Kong, and most of the Philippines. Japan looked unstoppable, and America’s future looked grim. 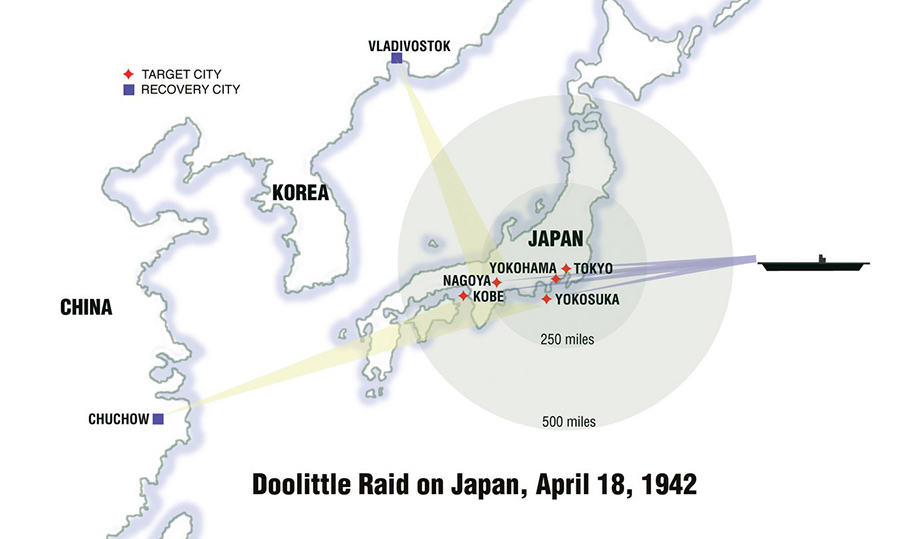 The feeling in the United States after Pearl Harbor was much like the way Americans felt after the attacks of September 11th, 2001. “We have to do something!” But what plan would work to strike back at the Japanese?

The answer was a quickly-organized surprise raid on the Japanese homeland. Sixteen B-25B mid-range bombers with 5-man crews in each would take off from an aircraft carrier within flying range of Japan.

They would bomb strategic targets near Yokohama and Tokyo. Then they’d fly another 1,600 miles to friendly airfields in mainland China.

Seasoned pilot Lieutenant Colonel James Doolittle of the Army Air Forces volunteered to lead the raid. It became known as the “Doolittle Raid,” or the “Tokyo Raid.” 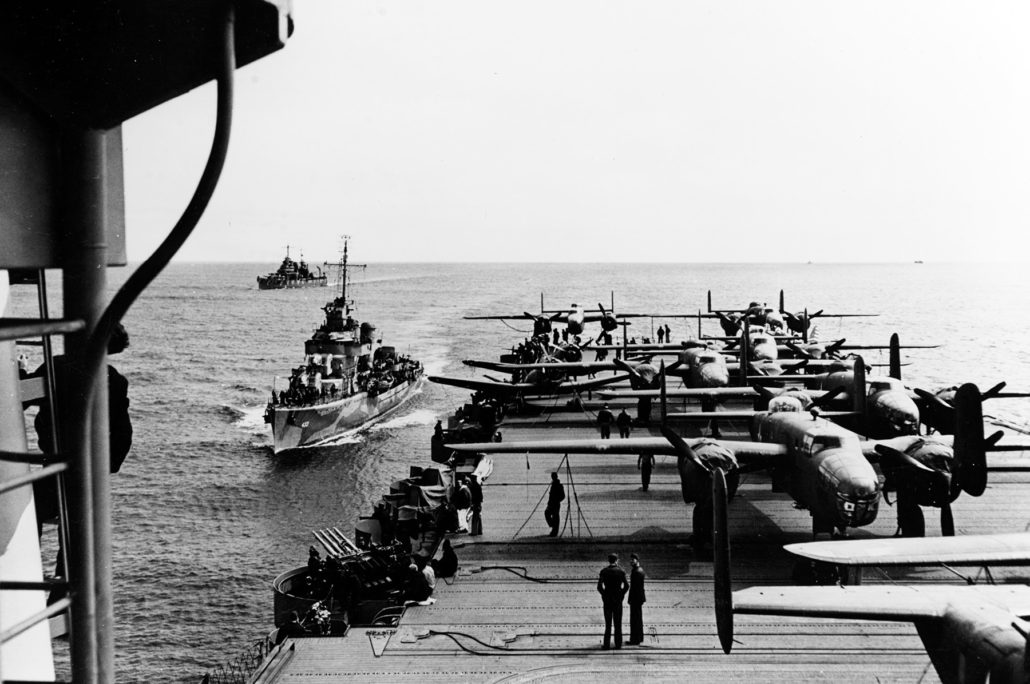 View looking aft from the deck of USS Hornet (CV-8) while en route to the mission’s launching point. USS Gwin (DD-433) is coming alongside, as the USS Nashville (CL-43) steams in the distance. Eight of the mission’s sixteen B-25B bombers are parked within view, as are two of the ship’s SBD scout bombers. Note midships elevator, torpedo elevator, arresting gear and flight deck barriers in the lower portion of the photo, and 1.1 quad anti-aircraft machine gun mount at left. U.S. Naval History and Heritage Command Photograph. 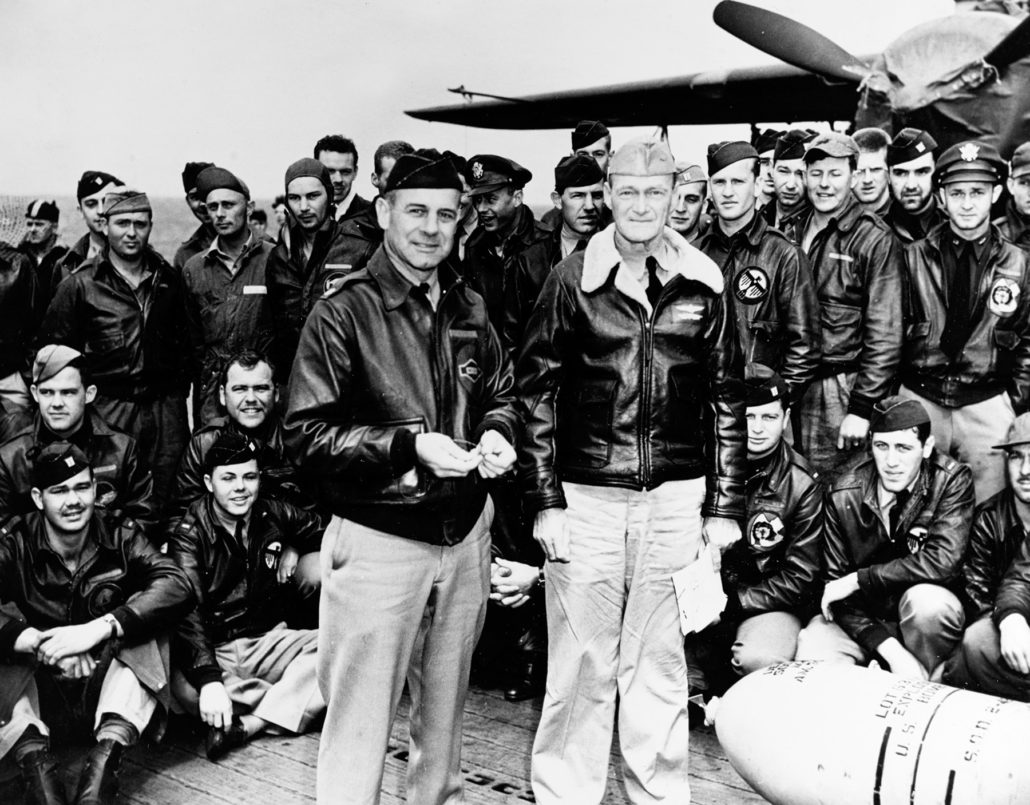 Carrying Out the Mission

The morning of April 18, 1942, the Raiders took off from the aircraft carrier USS Hornet. When they reached the Japanese homeland, they dropped their bombs on oil storage facilities, factory areas, and military installations. With the mission completed, they turned toward China, but realized that they did not have enough fuel to reach the airfield. Some pilots ditched at sea and bailed out; others, including Doolittle, crash-landed in China. And one plane landed in the Soviet Union. 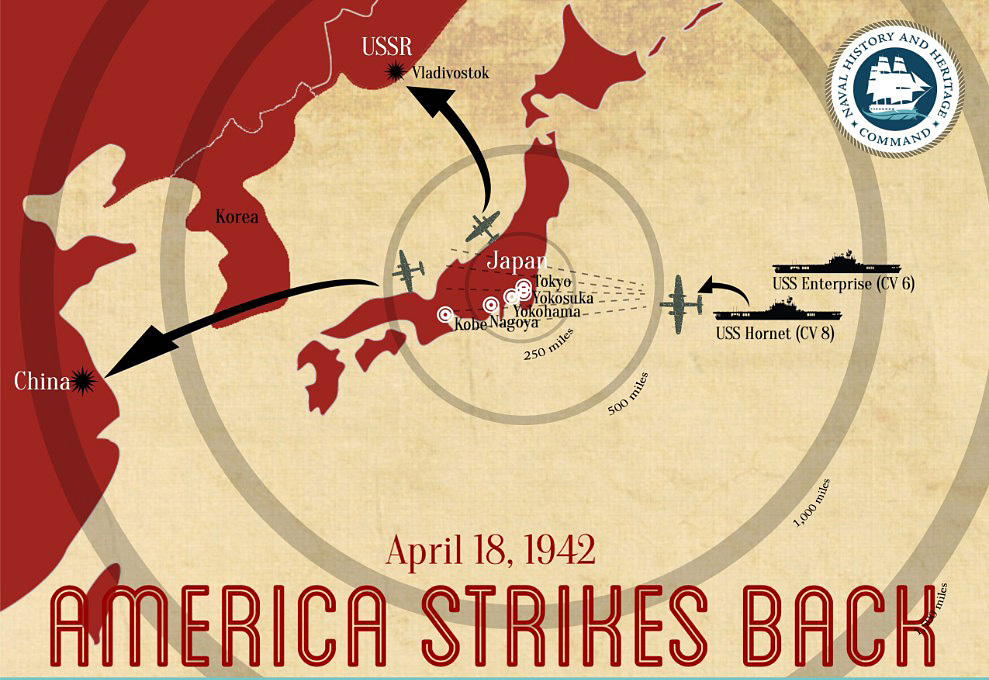 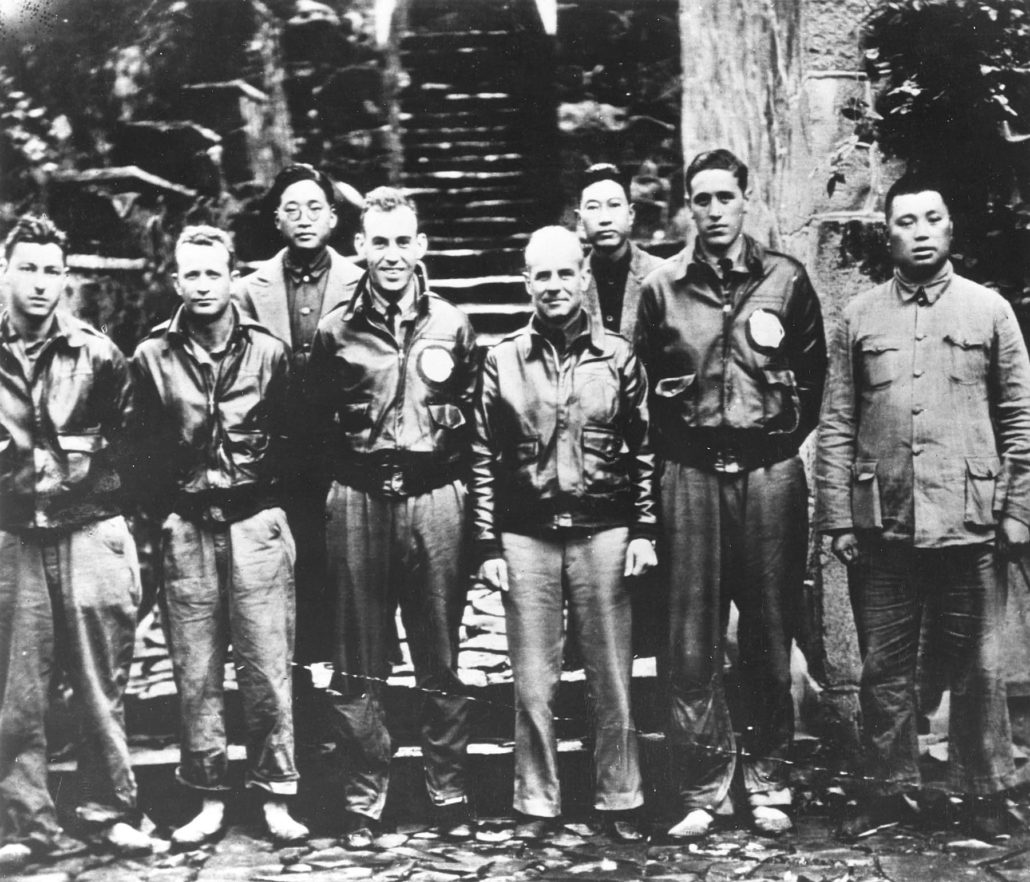 With the help of the Chinese people, most of the Doolittle Raiders safely reached friendly forces. Lieutenant Colonel James H. Doolittle, (center) with members of his flight crew and Chinese officials in China after the 18 April 1942 attack on Japan (Naval History #97502).

The Doolittle Raid did only minor physical damage, but it was a clear victory: the U.S. had struck back. As people at home came to grips with the war and the sacrifices they would need to make, the successful raid gave them a much-needed morale boost.

Japan, on the other hand, was stunned, and furious that their homeland had been attacked. Military leaders recalled some of their frontline forces to defend mainland Japan. The raid also provoked Japan’s military leaders to approve Admiral Yamamoto’s strategy to capture Midway.

To learn more about the Doolittle Raid and the B-25B bomber, visit the Pacific Aviation Museum at www.pacificaviationmuseum.org or visit the National Museum of the U.S. Air Force in Dayton, Ohio.

By late April of 1942, Navy intelligence was certain that the Japanese were planning a major offensive that summer. Pacific Fleet Commander Admiral Chester Nimitz suspected Midway was their target. He knew that if Japan took Midway, they would soon have a stranglehold on the Pacific. He flew to Midway on May 2, 1942 to examine the islands’ defenses. 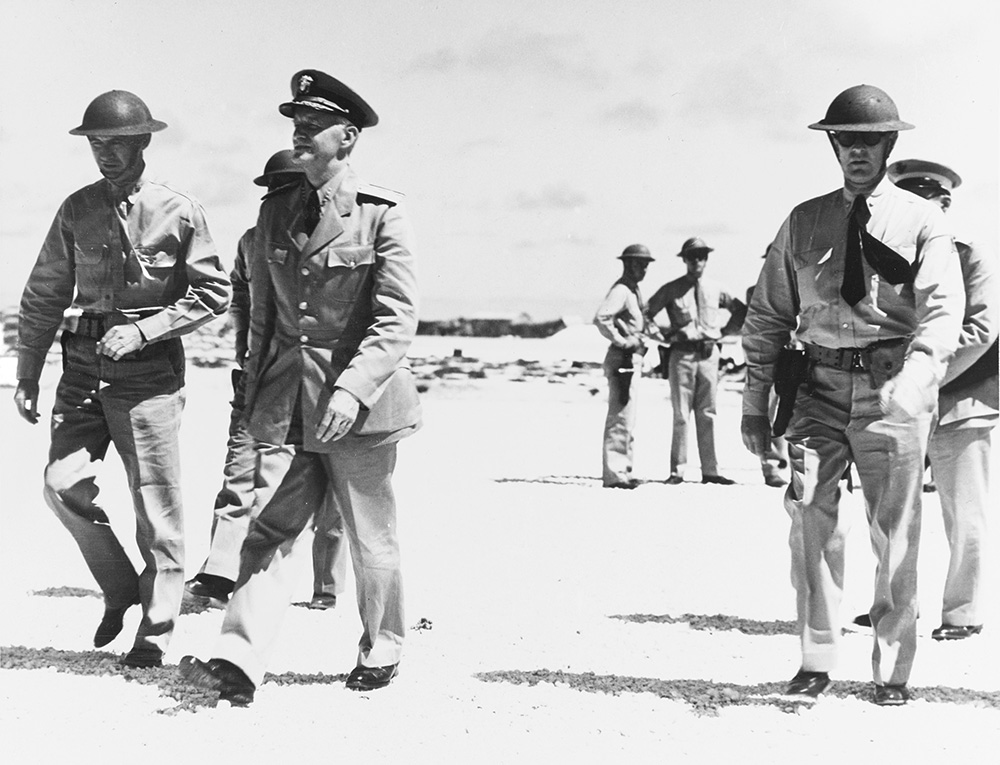 On his arrival, he met with Marine Lieutenant Colonel Harold Shannon, commander of the 6th Defense Battalion and the 2nd Raider Battalion and Navy Commander Cyril Simard. When he had finished a thorough inspection, Nimitz asked them what else they needed to defend Midway.

Shannon responded quickly, naming off what he needed. Pausing to considering the request and knowing he had limited resources, Nimitz asked, “If I get you all these things you say you need, can you hold Midway against a major amphibious assault?” 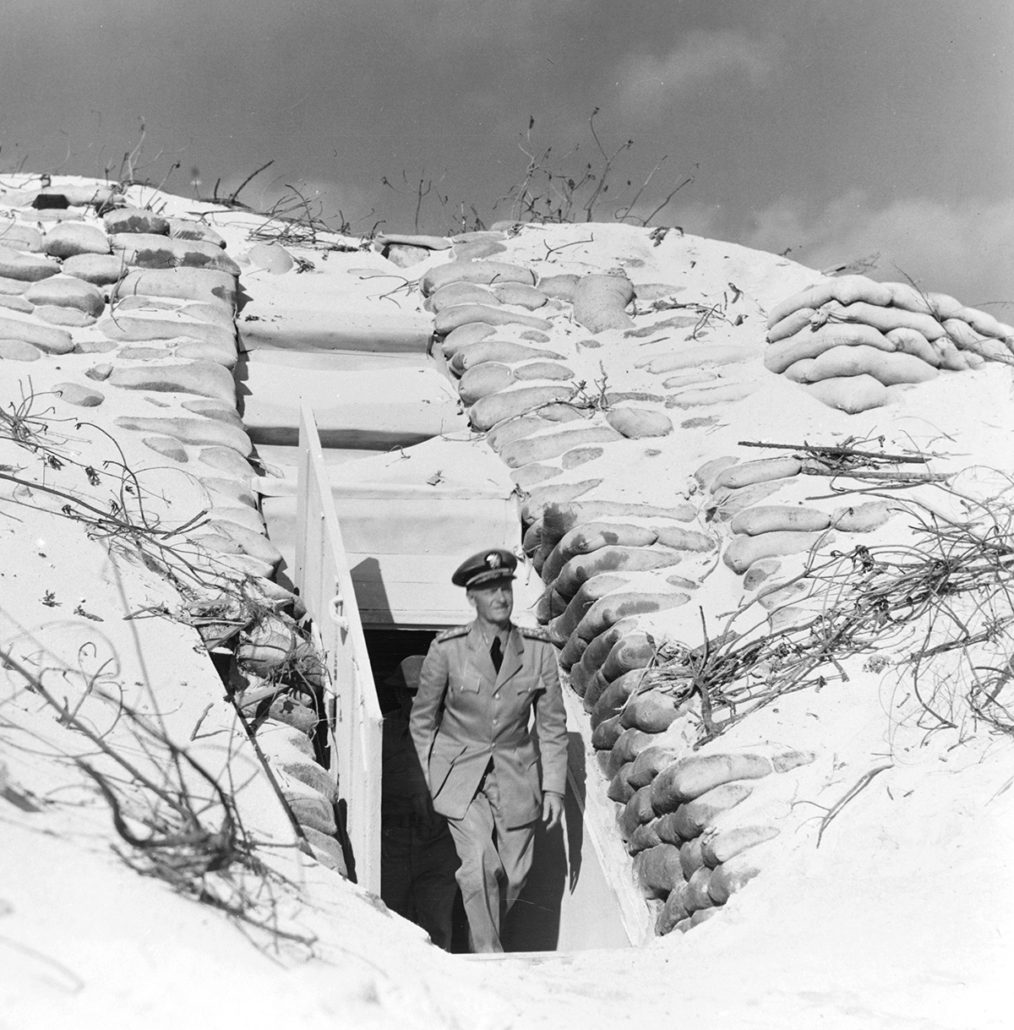 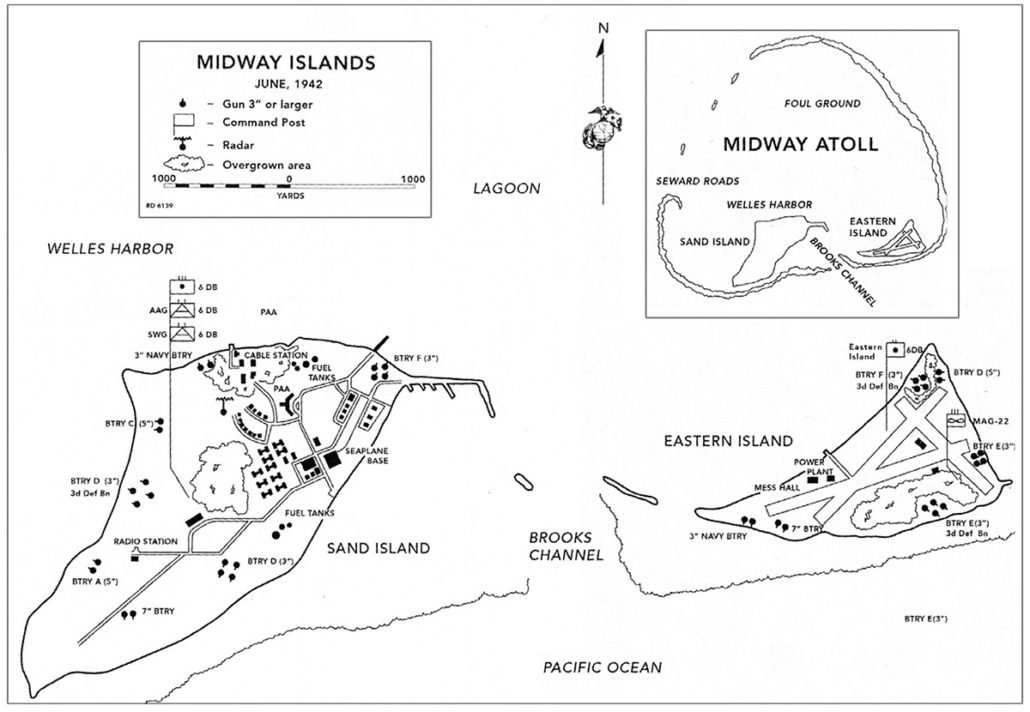 By the dawn of the battle, Midway was bristling with men and machinery, including: 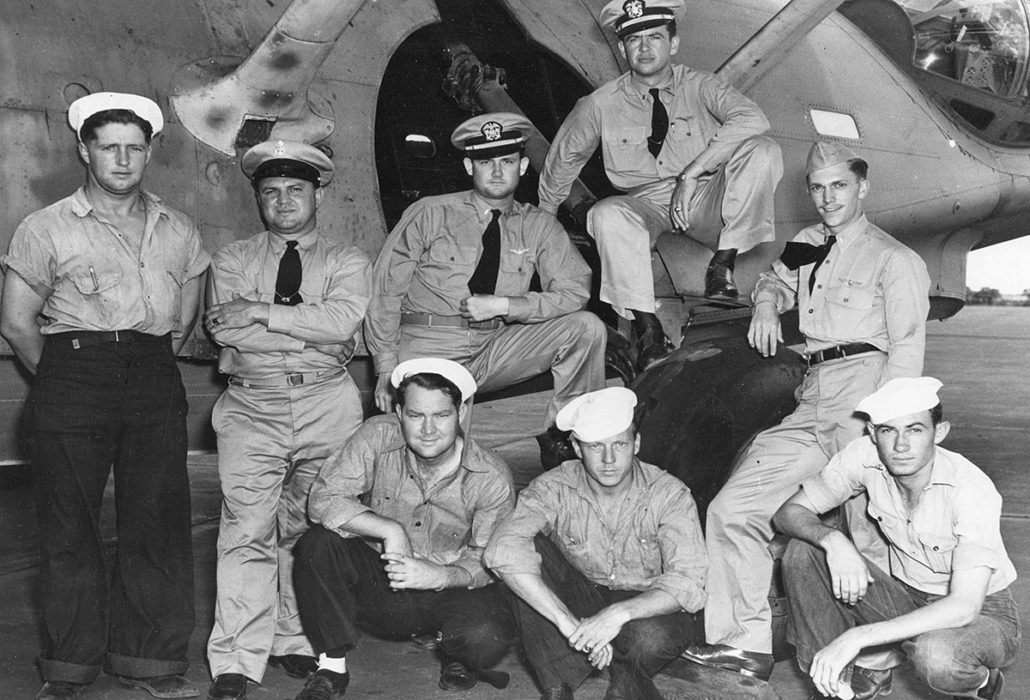 Nineteen submarines patrolled the waters around Midway. They were joined by a squadron of Elco Patrol also known as PT-boats.

PT-Boat – these boats traveled from Pearl Harbor to Midway, completing the longest open-water navigation in their history. 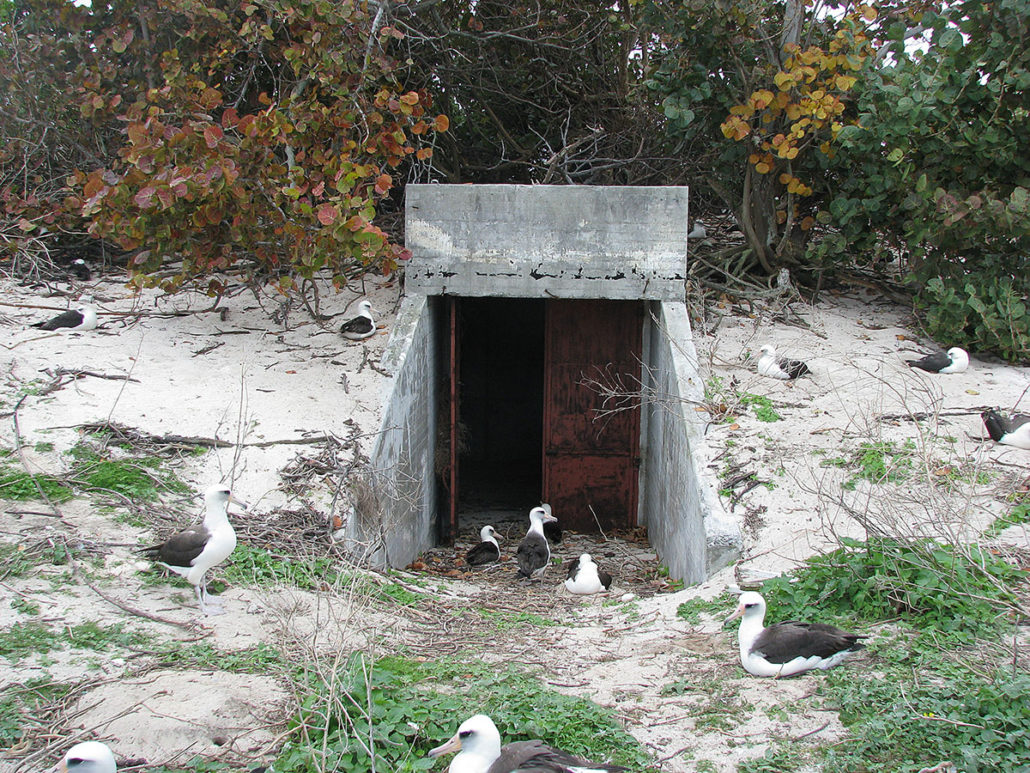 By late May of 1942, Admiral Yamamoto had several Japanese victories in the Pacific under his belt. He was certain he had the strength to sink the U.S. Navy’s carrier fleet in a head-to-head contest at Midway. Once he’d occupied the Atoll, he could strike at the rest of Hawaii, then go on to launch surprise attacks on the West Coast.

He sent a large fleet of ships steaming towards Midway from the northwest—four carriers with elite pilots, along with battleships and troop transports.

On the other side, Nimitz had a depleted naval force—and he had a good idea how strong the enemy was. He understood the risks, but he made the gamble that his intelligence team knew what they were talking about.

He positioned his ships to do maximum damage to the Japanese fleet while staying at a safe distance.

The element of surprise was the ace up his sleeve.

To learn more about the intelligence corps and the codebreakers’ vital contribution to winning the Battle of Midway, go to [this link.] 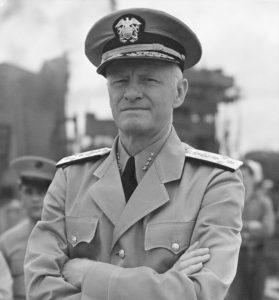 Knowing time was running out, Nimitz directed the U.S. carrier fleet to move swiftly. He sent his three carriers to rally at “Point Luck,” about 300 miles north northeast of Midway. 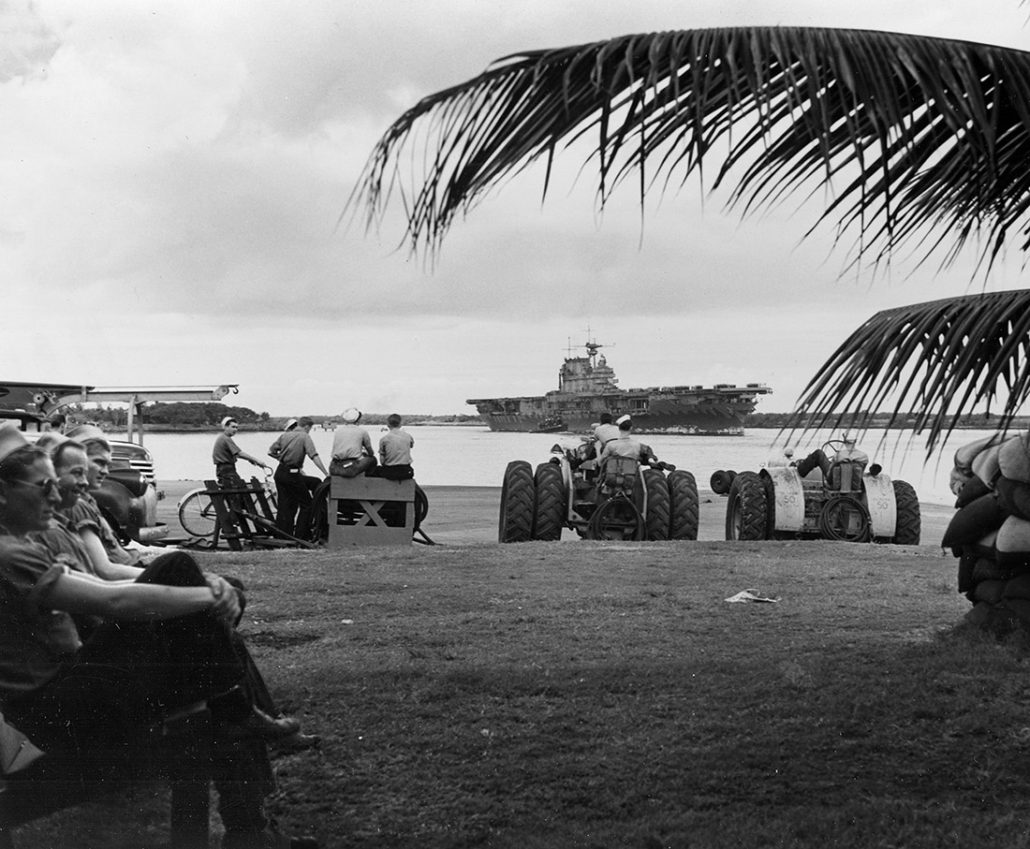 The Hornet and Enterprise were returning to Pearl Harbor after the Doolittle Raid. All three carriers had sustained serious damage. Workers in the Pearl Harbor Navy yard spent 24 hours a day for three days repairing the carrier. They brought the Yorktown up to basic battle-worthiness, and her crew hurried to take her to meet Task Force 16 at Point Luck. 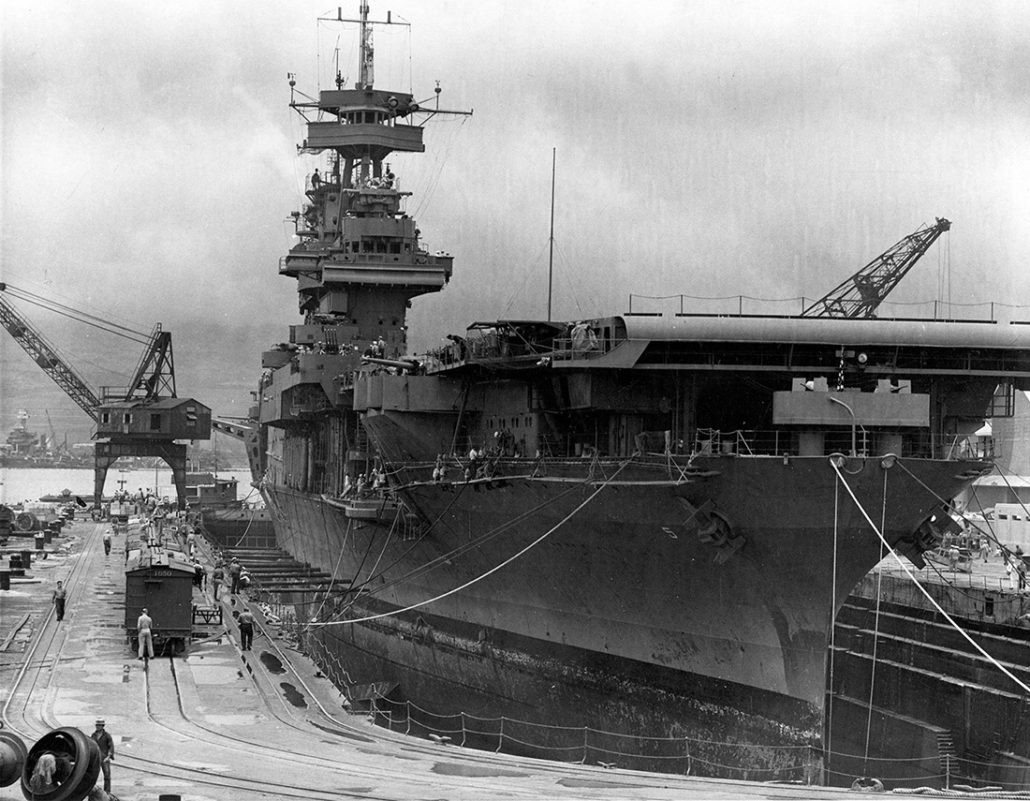 The Japanese routinely used submarines as mobile gas stations for their long-range reconnaissance seaplanes. The seaplanes met up with the subs in calm waters to refuel in places like French Frigate Shoals.

Knowing this, Nimitz ordered his own seaplane tenders, the USS Ballard and the USS Thornton, to the area to support the U.S. air patrols and block the Japanese. With French Frigate Shoals occupied by the American forces, the Japanese seaplanes were forced to turn back to their ships to refuel. 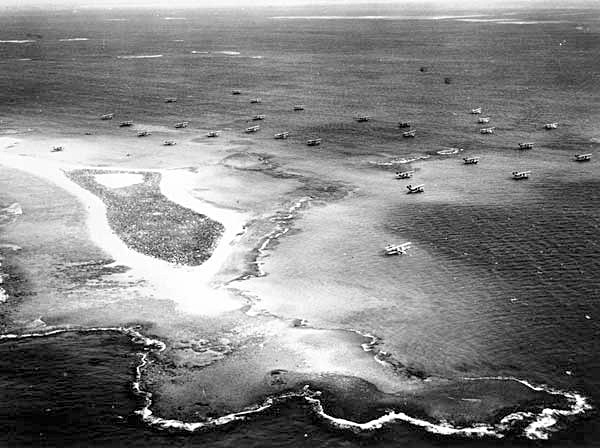 The Japanese command planned to set up a “picket line” of submarines across the Northwestern Hawaiian Islands. These subs would relay U.S. carrier movement to Yamamoto before he attacked Midway. Admiral Yamamoto knew just how critical this information was. It would tell him how much time he had to attack the Atoll before he turned to attack the U.S. Navy war ships that he expected would be sailing from Pearl Harbor to rescue Midway.

But the picket line never got the vital information Yamamoto needed. Nimitz had ordered his carrier fleet out of Pearl Harbor before the Japanese could move their subs into place. Thus, Yamamoto never learned that U.S. carriers were already assembled at Point Luck. 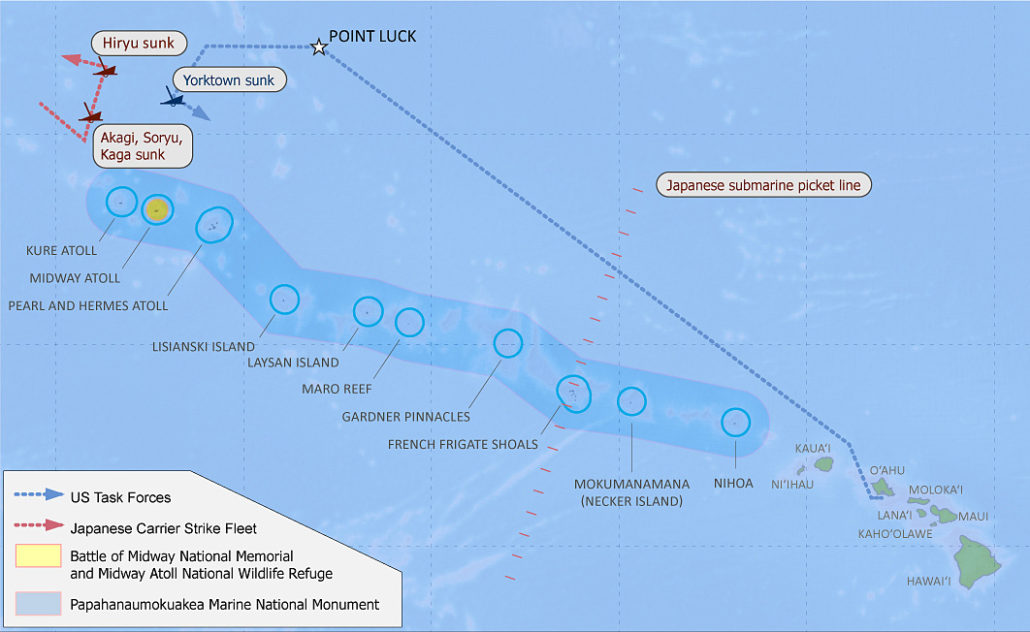 As the battle loomed, the leaders of the Pacific Command prepared their officers for the upcoming battle. During the battle, they were to “take calculated risks.” They were to balance the risk of losing U.S. troops and carriers against causing substantial damage to the Japanese carrier fleet.

“The whole course of the war in the Pacific may hinge on the developments of the next two or three days.” —final entry in the Commander in Chief Pacific Command Summary for June 3, 1942